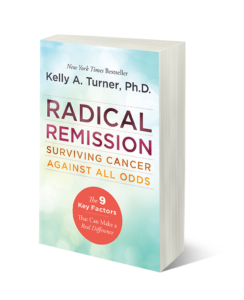 In her New York Times bestseller, Radical Remission: Surviving Cancer Against All Odds, Dr. Kelly A. Turner, founder of the Radical Remission Project, uncovers nine factors that can lead to a spontaneous remission from cancer—even after conventional medicine has failed.

While getting her Ph.D. at the University of California, Berkley, Dr. Turner, a researcher, lecturer, and counselor in integrative oncology, was shocked to discover that no one was studying episodes of radical (or unexpected) remission—when people recover against all odds without the help of conventional medicine, or after conventional medicine has failed.  She was so fascinated by this kind of remission that she embarked on a ten month trip around the world, traveling to ten different countries to interview fifty holistic healers and twenty radical remission cancer survivors about their healing practices and techniques. Her research continued by interviewing over 100 Radical Remission survivors and studying over 1000 of these cases.  Her evidence presents nine common themes that she believes may help even terminal patients turn their lives around.

← Wisdom: The Importance of Holding Space